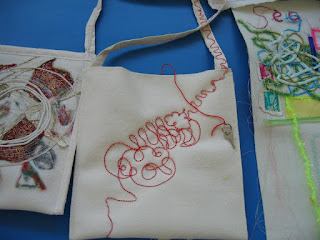 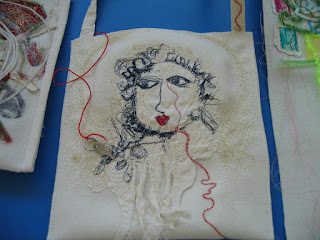 Hope your having a good week, It's been very hot here and it sounds like thunder on it's way.

Here is a picture of the machine embroidery I did on my course.

It depicts Ariadne from the old textile I sketched.

I did it straight onto the fabric with out drawing it on first, hence it's a bit wobberly.

This is a story about Ariadne.

Since ancient Greek legends were passed down through oral tradition, many variations of this and other myths exist.[2] According to one version of the legend, Minos attacked Athens after his son was killed there. The Athenians asked for terms, and were required to sacrifice seven young men and seven maidens every nine years to the Minotaur. One year, the sacrificial party included Theseus, a young man who volunteered to come and kill the Minotaur. Ariadne fell in love at the first sight of him, and helped him by giving him a sword and a ball of the red fleece thread she was spinning, so that he could find his way out of the Minotaur's labyrinth.

Email ThisBlogThis!Share to TwitterShare to FacebookShare to Pinterest
Labels: Front of bag and back

Hi. Thanks for stopping by my blog, I absolutely love this bag! Oh, and I would love to swap for a thunderstorm!

You must have really enjoyed that course because your machine embroidery is wonderful ~ so very lovely.
Thunderstorms ~ we have just had the mother and father of one!
Thank you also for your kind comments.

Thanks Karen,Viv and Jackie.
Jackie, Now I can say she has the tear in her eye for being dumped!
Michala x

Hey kaylacoo
Thank you for stopping by my blog too...consider yourself well and truly linked!! ;0)
(And a cheeky hello to hens teeth whilst I'm at it!)

Can't say enough about your work, I absolutely adore it, I shall be keeping an eye out for further updates :)

Hello!!
I saw Ariadne over on flickr (yesterday?), and commented on her there. Gorgeous!
Thanks for popping over for a read of my blog...I'm off to read a bit more of yours, then to check out the felt book you noted.
Nice to meet you! Am adding a link to you...I love your embroidery.

This is beautiful! I very much admire your FME. I couldn't do that if my life depended on it.

Sounds like a great workshop and a very interesting exhibition too.

Michala Gyetvai (Kayla coo)
Warwickshire, United Kingdom
Hello I'm an artist who is fascinated with threads and fibres. My work is an emotional connection to the world around me.You can find out more about my work on my website here http://www.michalagyetvai.co.uk/